A bad January for the purchase of capital goods 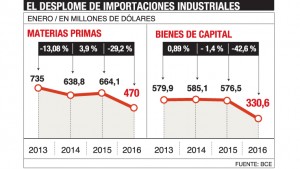 Industries started the year badly in regards to feed on raw materials and capital goods in order to make businesses operate. Both items have fallen, respectively, 29.2% and 42.6%, according to the import figures of January 2016, compared to the same month of 2015.

The fall is much higher when compared with the balance of imports the Central Bank of Ecuador three years ago, when there were no safeguards. In January 2013, $ 735 million in raw materials (a 36.05% more) and 579.9 million dollars (42.8% more) were imported.

President Correa had lunch with Tweeter users that support his government