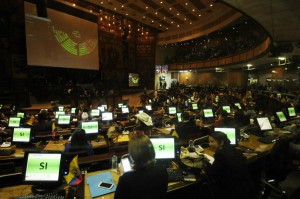 Yesterday, the National Assembly adopted the draft resolution that regulates the dissemination of videos, documents and speeches of assembly members during debates in the plenary.

The motion was introduced by Assemblywoman Maria Jose Carrion, of Alianza Pais, who questioned the opposition for using social networks as Facebook and Twitter, calling them “coup trenches.”

Carrion, also requested the implemention of the Communication Law for Assemblywoman Cynthia Viteri, who presented, on Tuesday, a video that would be part of a smear campaign against President Rafael Correa, according to the ruling party.

Viteri branded as impostors and hypocrites the Alianza País lawmakers, accusing them of a clear understanding about the illegal wiretaps the National Intelligence Secretariat (Senain) would make to certain politicians and citizens, for which they have paid more than half a million dollars.

Indigenous route for the strike of August 13