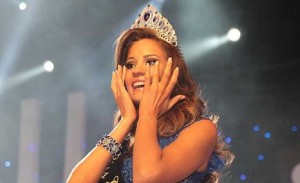 Silvia Alejandra Argudo Intriago, 21 years old, was chosen as Miss Ecuador 2014. Argudo takes the place of Constanza Baez; her height is 1.78 Mt and she studies psychology at the University of Kansas, in the U.S.

The gala began with music, at the auditorium of the Civic Center Theatre, where the family, friends and supporters of the candidates, were animating with lively cheers.

After several choreographies and musical interventions as well as the parades in bathing and gala suits, the jury chose six finalists, among which was Argudo. The representative of Esmeraldas, Inés Pachano Lara, was first finalist. As second finalist, Carla Prado Toret, third, Estefania Londono, fourth, Dianella López Dueñas, and fifth, Francis Caicedo.

As an additional recognition, Alejandra Argudo was chosen Miss Sedal 2014.

The reelection decision depends on the people according to Ramirez