Last Sunday with a commanding majority, Crimea voted in favor of joining Russia. “93% of the inhabitants of Crimea voted on Sunday in favor of the integration of the Ukrainian peninsula to Russia, and 7% were in favor of the autonomous status of Crimea within Ukraine,” according to a survey based on exit polls from Crimean separatist authorities. Later that day the Electoral Commission confirmed a final percentage of 95 %.

The Crimean electoral roll had to choose between “a reunification with Russia as a member of the Russian Federation” or return to a statute of 1992, which was never implemented, and gives a wider autonomy to the region. Keeping the current status within Ukraine was not part of the alternatives.

Meanwhile, the White House immediately rejected the results. “This referendum is contrary to the Constitution of Ukraine. The international community does not recognize the results of this vote made ​​under threats of violence and intimidation by the Russian military intervention.”

Also, the foreign ministers of the European Union (EU) officially condemned the referendum, which they described as “illegal and illegitimate,” so today they expect to approve sanctions against those responsible for the escalation of tension in the Ukrainian Autonomous Region. 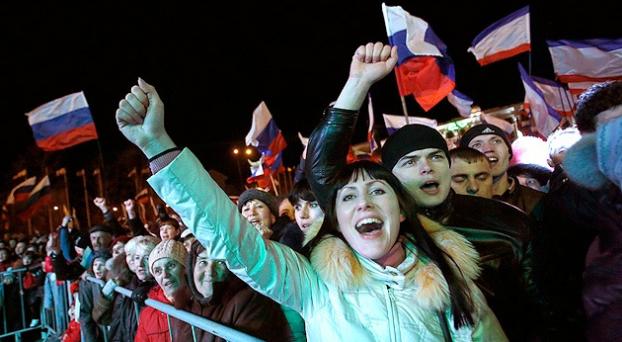 Crimean Russian speakers celebrating in Crimea over the results.