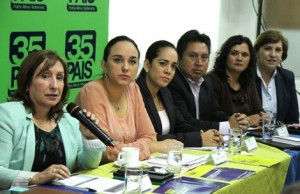 Alianza País yesterday accused the opposition of trying to destabilize the government by the call for a referendum on indefinite reelection. This, after the Constitutional Court in a rulingpaved the way for the adoption of that figure through Parliament without consultation.

The movement warned that they will “enforce” the decision of the Constitutional Court andcriticized the announcement from the presidential candidate of the opposition, Guillermo Lasso,to convene a ‘crusade’ in favor of a referendum.

“The referendum of Lasso (…) is just a strategy of elites to destabilize the national government,” said Alianza País (AP) in a statement.