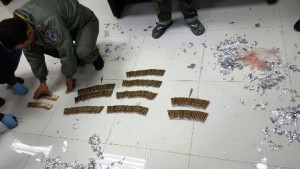 A cargo of ammunition and grenades camouflaged among fruits and $ 82.860 in cash were seized Tuesday near Del Chota valley by members of the Northern Operational Command 1.

During the operation three people were arrested and a car was also seized, which apparently, was heading from Quito to Tulcan.