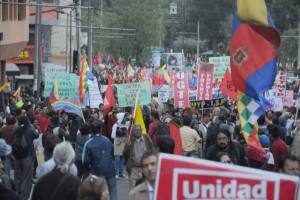 The demonstrations of last Wednesday were a success, said the president of the Confederation of Indigenous Nationalities of Ecuador (CONAIE), Jorge Herrera, so they are already planning three protest actions.

Ecuarunari plans a national mobilization for October 12 (Day of the Race) as an emblematic date. Trade unions pose a march on November 15 (commemoration day of a slaughter of workers in Guayaquil), a historical day for the Ecuadorian labor movement, informed Carlos Perez Guartambel, president of the Ecuarunari.

He added they will give the Government a deadline until the second week of November to file the constitutional amendment, and in case of not doing so they will convene a strike of at least 48 hours.

Perez Guartambel said the the Ecuarunari raised, in addition, to implement Section 444 of the Constitution to convene a Constituent Assembly and “dismantle the correism.”