BREAKING NEWS
Suspected fraud towards Álvaro Noboa
Binomial by Álvaro Noboa will be presented on August 9, 2020
Ecuador Rejects Demand From Two Debt Holder Firms
Spain to investigate espionage of former President of Ecuador Rafael Correa
Celebrations: in Guayaquil they found weapons and in Quito they canceled graduations
President Lenín Moreno forms a team of specialists for the protection of the Galapagos
On August 9 the name of the binomial of Álvaro Noboa will be given
Banned meetings of 25 people in 14 provinces of Ecuador
The Biess opens the first virtual fair for housing in Guayaquil
Ecuadorian Navy watches over the fleet of ships near the Galapagos 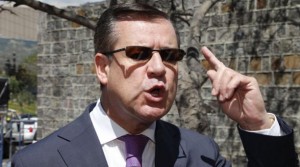 Andrés Páez talked about the warning statements of the Vice President on taking legal actions against him, and indicated he will continue investigating the alleged corruption case he denounced.

“I will continue investigating, they got it wrong. I know the consequences. A chase against me will come. Now they will make judge Lucy Blacio remove my immunity as they did with Clever Jimenez. I know they will start a lawsuit, but I am not afraid,” said the lawmaker from Creo.

After sending a letter to President Rafael Correa, Glas replied: “Stand stiff as I stand and go to the prosecutor and sign a complaint against me. Acuse me and I will defend myself with laws and justice. I swear on my mother, on my wife, children, brothers and the15 million of Ecuadorians that I have dignity.”

After these statements Páez said: “The President and Vice President should be grateful (…) But they are preparing for me a cold jail in Latacunga to imprison my body, but they will never imprison my mind, which will continue to fight this fascist adventure wrapped of populism.”

Deadline for the report on Manga del Cura would finalize Tomorrow