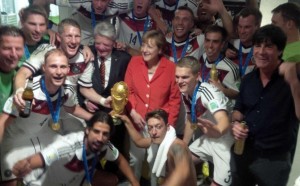 After a tough competition against Argentina in the final of the World Cup Brazil 2014, German Chancellor Angela Merkel went to the dressing rooms of the Teutonic team to congratulate its players and take pictures.

In the picture appear: Merkel, Joachim Gauck, the federal president, coach coach Joachim Löw and some of the players of the German team . 1-0 was the victory of Germany against Argentinacrowning for the fourth time the German country as soccer world champion .

Rihanna celebrated the victory of the German team