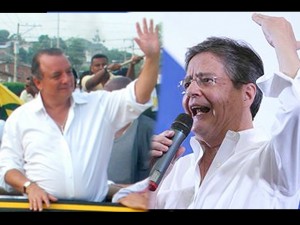 Politicians Guillermo Lasso, leader of the CREO movement, and Alvaro Noboa, today called for demonstrations that will depart from different sites of Guayaquil downtown, but will join that of social sectors.

Lasso´s march will depart before 17:00 from la Ferroviaria´s park, and will advance to the Centenario Park. The Objective, “protest against the foolish attitude of (Rafael) Correa, who does not want to rectify but continuing with the model that has exhausted the country.”

Meanwhile, Noboa summoned leaders of political groups in a “spontaneous” march that will depart from the underside of Banco del Litoral, located in Malecon and Tomas Martinez, at 15:00.

The Social Christian party also summoned a sit-in Boyaca and 9 de Octubre. Mayor Jaime Nebot said he will not attend but supports the protest.