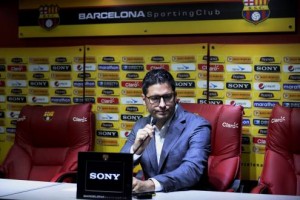 Antonio Noboa, president of the BSC.

“They have not idea of the damage they have done to Barcelona,” said Antonio Noboa, president of the bullfighters, after the presence of representatives of the Prosecution in the offices of the Monumental stadium to deliver a notice of an investigation by money laundering.

The letter informs Noboa to be on Wednesday, at 15:00, at the offices of the Justice Department to testify about an investigation involving executives of the bullfighter team, who allegedly received money into their bank accounts from a Venezuelan exporting company.

The president of the club spoke this afternoon at a press conference to present his arguments on the subject that caused controversy three days before the election of the new directory.

Accusations against a candidate of the club presidency

“They are interested in becoming president, for what? to harm the team. That is not a way win the election; Win the election with proposals, votes and people, gentleman, are upset for that attitude. It can not be possible that three days before an election we have a scandal like that you have caused, with a lie. That’s the way they want to get to us, by throwing us prosecutors. They are very frightened and do not know how to get to people, but we will make a parasite cleanse to those who want to manage the club, they want to take over Barcelona and they want to damage the image of the club. They have no idea of the international harm they have done, they are irresponsible, they play with the institution which was founded 90 years ago and Thursday we’re going to beat them up (in the polls).”

Luis Noboa: Cevallos and Alfaro Moreno can not be candidates of the Barcelona presidency

Antonio Noboa presents his defense on charges of money laundering