Archaeological objects are repatriated to Ecuador 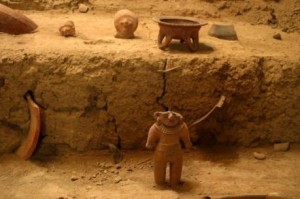 The entity for the Guardianship of Cultural Heritage of the Italian Police restored to the government of Ecuador ten archaeological pieces and a musical terracotta instrument  from pre-Hispanic origin belonging to the country.

These goods were recovered through the efforts of the Italian police in Turin and Monza, and then delivered to the ambassador of Ecuador in Italy, Juan Holguin Flores.

“So far in 2014, the Italian Government has returned to Ecuador thousands of pre-Columbian artifacts in the cases known as Pavesi, Baronetto and Customs, in long processes in which my country has felt the support of the authorities,” said Holguín.

In addition, the authority added that on Wednesday nearly 4,000 goods, recovered in Italy from 2007, will be repatriated to Ecuador from Genoa.