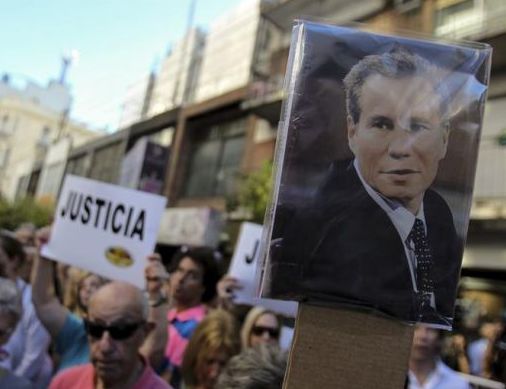 The Chief of the Argentine cabinet Anibal Fernandez called today prosecutor Alberto Nisman a “crook” and accused him of “embezzlement.”

“Nisman was granted the funds to clarify the AMIA bombing. If he used to spent that money hanging out with minas (girls) and pay ‘gnocchis’ (public employees who don´t work), then he mocked of 85 victims and more than 300 wounded during this time,” Fernandez said on Wednesday to the press.

According to the newspaper Página 12, Nisman used to take half the monthly salary of his partner Diego Lagomarsino, computer specialist and so far the only defendant in the case by having delivered the weapon that killed the prosecutor, and who shared an account with him and several of hid relatives in the United States.

Lagomarsino’s lawyer argues in a letter, he planned to file on Wednesday to the prosecution, that the computer specialist earned 41,000 pesos and deposited 20,000 in a Nisman´s account, according to advanced information of the newspaper.

For Fernandez, Nisman acted as “a crook as it has been rarely seen in this country. For now, what he is doing is misappropriation of public funds and there is also corruption here.”