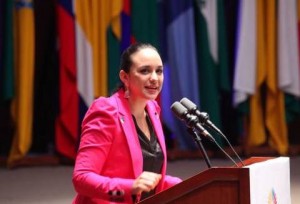 During the accountability of the President of the Assembly, Gabriela Rivadeneira (AP), it was revealed, among other things, that the number of projects filed last year in the organism was 36.

“Legislators already are no more clerks of the oligarchy to make piecework laws based on their interests,” said Rivadeneira.

Through a booklet was presented the summarizing of the projects that were discarded, which include two interpretative projects to Article 203 of the Code of Democracy and four others related to legalization of terrain.

Such number of projects were archived in 31 votings at plenary sessions between January 23 to December 3, 2013, and several of them were grouped in a single vote.

Regarding supervisory subjects, Rivadeneira reported that 325 requests for information were received until December 31, 2013 and, through the Technical Control Unit, which operates since September, 224 were processed and 101 were pending.