Assistance to Ecuador for $ 7 million comes from the United States 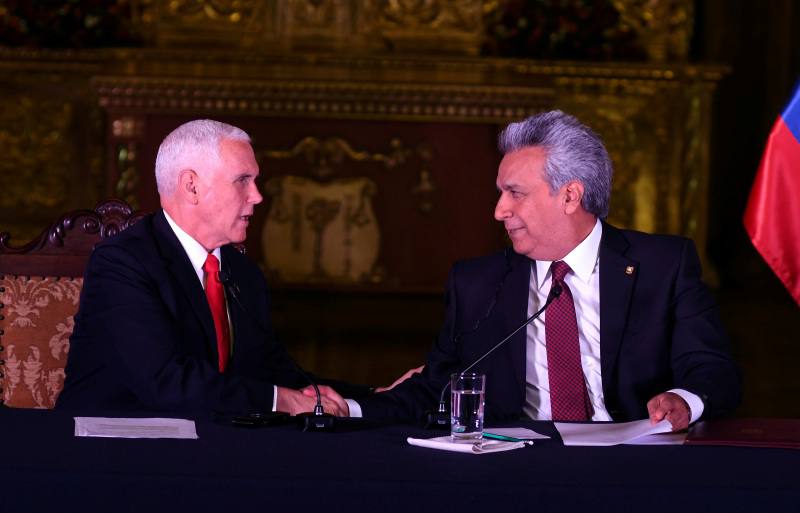 An offer of cooperation that borders the $ 7 million and the “renewal” of bilateral relations was the immediate effect left by the visit of the Vice President of the United States, Mike Pence, to Quito.

His passage through the country was brief. The binomial of President Donald Trump arrived on Wednesday, at 5:00 p.m., in Brazil and departed past noon yesterday to Guatemala, as part of an official tour that he undertook in Latin America to ‘strengthen’ regional security in the face of the political crisis from Venezuela.

Accompanied by his wife, Karen Pence, participated Wednesday night at a reception offered by President Lenin Moreno at the Government Palace.

At 09:30 yesterday he was again on the site for the visit. There was a formal greeting for the official photos, and then a private meeting.

Minutes before noon, both gave a brief press statement in the Banquet Hall, in which Pence announced US cooperation in three areas: $ 1.5 million for the fight against corruption; $ 3.5 million to fight against drug trafficking, security and defense, which is “working” in the Congress of that country; and $ 2 million to help the Venezuelan citizens who arrive in Ecuador driven by the political crisis in their country.

He exalted Moreno’s new political stance against that of his predecessor, Rafael Correa. “… Before his election, our nations had spent ten rather difficult years. Our towns were always narrow, but our governments were separated. ”

He thanked the “invitation” to reestablish the Office of Cooperation for Security for the joint work of the Armed Forces of the two countries, and called to be attentive to a “special threat”: the “collapse in Venezuela.”

The consequence, he said, is the migratory “exodus” of Venezuelans to neighboring countries, which according to their figures, only Ecuador in the last year would have admitted more than 350,000.

Therefore, there will be an assistance of more than $ 10 million to support Venezuelan migrants who are in the region, of which $ 2 million “will go directly to support Ecuador.”

For Moreno, the meeting was “productive” and “very positive”, but he maintained the position that the “solution for Venezuela can only be carried out by Venezuelans.”

Among other things, he stressed the agreement to convene at the end of this year to “a bilateral political dialogue table and the foreign trade council”, to deepen relations.

The appointment ended at noon. Only the Minister of Foreign Trade, Pablo Campana, gave brief details of the issues raised to Pence.

They requested that four products be included in the Generalized System of Preferences (GSP): tuna in shell, broccoli, artichokes and flowers. And a tariff-free steel export quota of 30,000 tons.

US will give 10 million dollars to countries that receive Venezuelans.

For Mike Pence’s visit, five blocks were closed around the Government Palace. The press could only enter through a door. In the Yellow Room, a list was run of each assistant media.

During the coverage, journalists were offered to ask questions. However, this process was conditioned to make queries already prepared by the organization. (I)

Bodies of journalists will be buried after 93 painful days