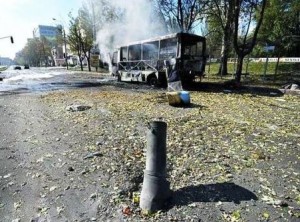 Ten people were killed in the city of Donetsk, in eastern Ukraine, eight of them by an artillery shell impact on a bus and its stop, the “Ukrinform” agency reported.

“Apparently, the bullet was fired from a missile launcher of multiple mouth. Most of the dead were in the parade, while some were on the bus, which was calcined,” the agency said, citing eyewitnesses of the tragic event.

Two other civilians died in the same city due to the impact of another shell next to a school, according to the pro-Russian separatists.

“A projectile has impacted one of the schools of Donetsk. Two residents were killed and three were wounded. They were not no students or teachers,” told to reporters Igor Kostenko, the so-called Minister of Education of the self-proclaimed People’s Republic of Donetsk (RPD).

The incident coincided with the start of the school year today in areas of the homonymous region controlled by the separatists.