Attorney General´s office shows a balance of the national strike 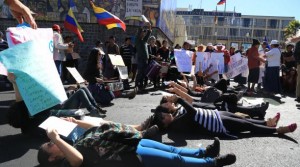 An initial assessment of the national strike was made by the Attorney General´s office on August 18, the same that was called by the indigenous movement and trade unionists.

111 people were detained from August 13 until yesterday. Of that total, 95 are still in prison accused of paralyzing public services, attacks or resistance, possession of weapons and ammunition and incitement to discord among citizens.

Only for the crime of attack and resistance, Section 283 of the Organic Integral Criminal Code dictates a sentence of six months to two years in prison.

The reason people were arrested and then released was because they did not qualify that of the flagrancy or because they perpetrated contraventions in which the prosecution has no competition. These figures differ from that of the indigenous. They built a web platform to record every arrest. For them, the detainees are 131. Most are from Puyo, Saraguro and Quito.

In the country’s capital a concentration took place to demand the release of the protesters. Women organized collectives that support the Indigenous, they lay down on the street, between the Patria and 12 de Octubre avenues. They blocked the traffic and demanded a hearing at the prosecution, which is located at that intersection.