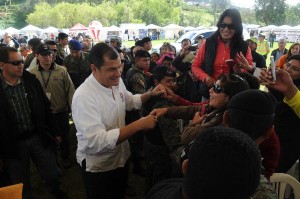 The State Bank won’t subsidize loans to Autonomous Decentralized Governments (Municipalities and Provincial Councils) for construction of projects in their jurisdictions.

President Rafael Correa criticized during his Weekly address the big financial support that the State assumes in projects, which according to the president, should be competence of the local governments.”Credits for subsidies of up to95% were given” said Correa.