Autonomous governments will receive between 8 and 10% less in 2016 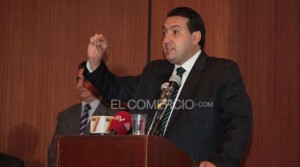 Finance Minister Fausto Herrera said on September 10, 2015 at a press conference with the prefect of Pichincha, that next year will be a year of adjustment for everyone and autonomous governments will not be the exception.

In 2016 the GAD´s (for its Spanish acronym) could receive between 8 and 10% less than the assigned by the Treasury this year, which was USD 3253 million, according to Herrera.

The official also pointed out that the regime announced that the years 2013, 2014 and 2015 would be difficult years due to investment in public works. “It is not the sucretization (connotation of the old Ecuadorian currency -the sucre-) nor the bank bailout. It is public work that benefits each of Ecuadorians.” The phrase aroused the applauses and cheers from the audience.

Alberto Dahik recommends returning to the IMF and eliminating subsidies