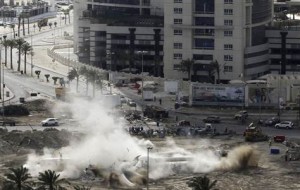 The Pearl Monument was the landmark of the recent anti-government protests. Today the Bahrain security forces demolished the monument, now pieces of the white modern structure lay in a pile of white rocks in the center of the Pearl Roundabout.

The government explained that the demolition was made to optimize the traffic of the area. Thousands of civilians gathered at the monument during the height of anti-government demonstrations since last month. Members of the opposition expressed their disappointment at the demolition of the structure that was one the government most famous landmarks.

Khalil Al Marzooq, leader of the Wefaq party stated their contempt by saying that it was a stupid act on behalf the authorities. Meanwhile the troops from Saudi Arabia and the United Arab Emirates moved into Bahrain on Monday to protect the safety of citizens.