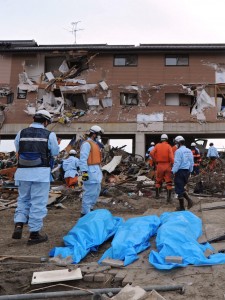 Authorities in Japan rose to 5,429 dead and 9,594 the missing people in the earthquake and subsequent tsunami in the northeast of the country, according to the latest official count provided today by the police. It is feared that the final number of victims would increase as in the most affected provinces Iwate, Miyagi, and Fukushima, thousands of people are still not localized.

More than 100,000 Japanese soldiers and reservists, aided by foreign rescue specialists volunteers, are looking for survivors trapped under debris or swept out to sea by the tidal wave of ten meters.

So far we have rescued about 26,000 people, according to the Japan Government. Nearly 80,000 buildings and houses were destroyed and more than half a million evacuees are living in temporary shelters about 2,500, many of whom have no running water or electricity.

The magnitude of the tragedy led on Thursday Emperor Akihito to go on television to the public for the first time in his 22 year reign to call for solidarity, peace, and pray for the survivors.