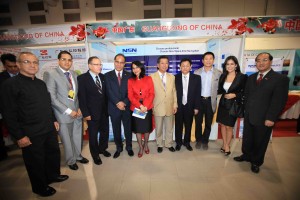 The Guayaquil Bank and the Exim Bank of China, signed a cooperation agreement with the objective of stimulating the trade with Ecuador. The signing took place at the opening of the IV Fair of Trade between China and Latin America, Expo China 2014, which will be developed until August 9 at the Conventions Center of Guayaquil.

“Credit lines for exporters and importers will be developed,” said Vincent Wong, President of the Ecuadorian-Chinese Chamber of Commerce . He stressed that Ecuador’s trade relationship with China since the state point is narrow, but at private level it should be further strengthened. Therefore, two more cooperation agreements were signed . One is to give added value on the bamboo and the other to stimulate tourism.

Antonio Ruales, Director of Pro Ecuador, highlighted that after the signing of the trade agreement with the European Union (EU), the country must open more markets in other continents such as Asia; “especially with China, where it exists opportunity for all,” unlike the EU, where we must compete with other countriesof the region.

Representative of workers of Claro rejects reform to Telecommunications Law