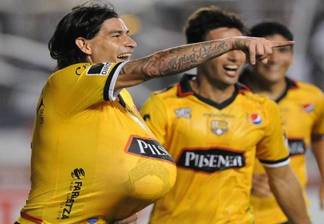 Barcelona won yesterday to El Nacional 4-1 in the Atahualpa Stadium at Quito by the date 11 of the second stage of the national soccer championship, and positioned on first place of the standings with 25 points.

The Argentine Ismael Blanco scored three goals (37, 52, 91 min) after taking advantage of the rival team mistakes and having the ability to define in precise moments.

Barcelona’s fourth goal, third in the chronological order, was converted by Ely Esterilla after a free kick shot at minute 73.

At 71 minutes, Tito Valencia from El Nacional took advantage of a Bacelona’s defense oversight and scored the discount on the scoreboard.

On Sunday, the two teams will encounter again at the Monumental stadium in Guayaquil at 16:45.

Correa granted Nebot with a deadline to assume traffic responsibility