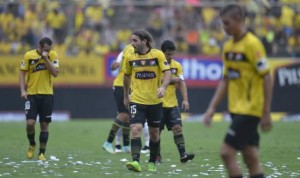 On Sunday, Liga de Quito overcame the yellow team 1-0 in a tight match played at the Monumental stadium. Argentine Diego Morales, of Liga de Quito, gave the victory to the capital club with an impeccable technique, thus maintaining on the top of the national championship. Barcelona had ball control, but its attack maneuvers were erratic, while Liga was characterized by its practicality and effectiveness.

At minute 2nd, by a failure of goalkeeper Máximo Banguera and his defense, when trying to perform an operation from the goal, Fernando Hidalgo manages to get the ball, which was ceded to Morales, who with a straight right scored the winning goal, closing the 15th date of the championship. On Wednesday Barcelona will face Liga de Quito at the Casa Blanca stadium.

Emelec celebrates its 86th anniversary with the inauguration of its museum