Bonil apologizes with Agustín Delgado through a caricature 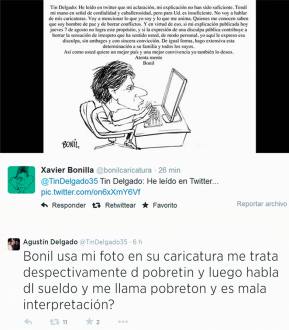 From his official Twitter account, the caricaturist of El Universo daily Xavier Bonilla, aka Bonil, offered the night of August 7 apologies to Assemblyman Agustín Delgado and his family for the cartoon published on Tuesday, August 5.

“Tin Delgado: I read on Twitter that my clarification, my explanation have not been enough,” starts Bonil his writing with regard to that, hours before the former football player also expressed his displeasure over the cartoon on Twitter.

Bonil accompanied his tweet with a drawing of himself and said:. “I held out my hand in sign of cordiality and chivalry, but for you it is insufficient. I will not talk about my cartoons. I will mention what I am and motivates me. Those who know me know that I am a man of peace and who erases conflicts. And by that, if my explanation publishedon Thursday August 7 does not achieve this purpose, and if the expression of a public apology contributes to erase the feeling of disrespect that you have felt, personally, here I would express that apology, unambiguously and with sincere conviction. “

In addition, he concluded his text with an apology to the family of Tin: “Likewise, I extend this determination to his family. Just as you want a better country and a better living I also desire it. Sincerely Bonil.” 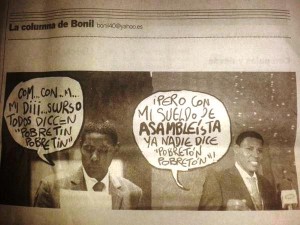