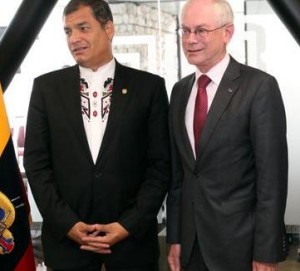 After arriving to Bogotá and before attending the inauguration of the second term of the Colombian Juan Manuel Santos, President Rafael Correa spoke with the head of the European Council Herman van Rompuy, on tariff preferences between Ecuador and the European Union (EU) .

The appointment was at the new venue of the Embassy of Ecuador in Bogotá. Correa spoke with Van Rompuy on the extension of tariff preferences, after the country finally reached an agreement with the EU last month.

Other points discussed were the advantages that both parties will have with the multiparty agreement, whose discussions started four years ago.

The European delegation, composed by the EU Ambassador María van Gool, has scheduled other meetings in Bogotá. One with the Colombian President and the other with that of Peru, Ollanta Humala, to discuss the economic agreements they signed.

Russia closes import market to countries that sanctioned it