Brazil invests $ 900 million in security for the World Cup 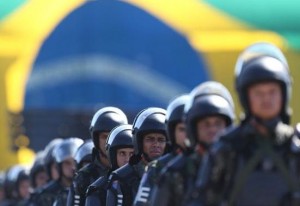 More than 150,000 military security personnel will work to protect the twelve venues of the World Cup in Brazil, with the objective that neither social protest nor any other incident prevents the normal functioning of the event.

“This integration is the great victory of the World Cup for us”, said on Tuesday the Director of the Special Secretariat for Large Events Security (SESGE), Andrei Rodrigues, in the presentation of the national security plan for the event.

In addition to the 70,000 soldiers and 60,000 policemen of different mobilized bodies, 20,000 private security agents will be present in the stadiums, confirmed the Director General of the Local Security Organising Committee, Hilario Medeiros.

The budget for arms procurement and deployment of the different forces is approaching 2,000 million reais ($ 900 million), as confirmed by the authorities.

CAN: Resolution 116 must be removed within 15 days