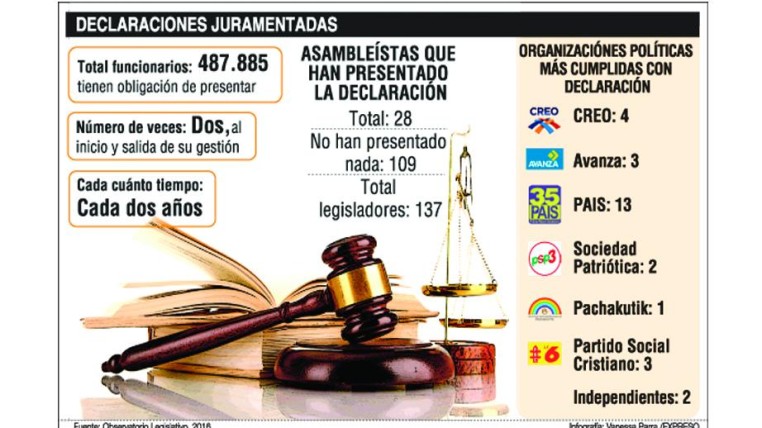 Alianza PAIS lives a very complicated time and has lost credibility. The opposition states this, just by looking all cases whose protagonists are government officials or legislators of the ruling party.

Of 137 assemblymen, six failed the special examination on their assets declarations by the Comptroller General´s office. This was an order of the President of the Assembly, Gabriela Rivadeneira, a year ago. “We demand transparency, control and sanctions if there is an accusatory opinion by the prosecutor´s office,” according to assembly members.

Among those who have problems, five are government supporters and one is in the opposition. There are five men and one woman.

One of the MPs who did not pass the exam spoke to this newspaper. He said he sold a house for $ 140,000. But the buyer lives abroad, he said. Therefore, he could not submit the papers of that negotiation. However, he got the documents and justified the change of the title deed. “I am calm. I have submitted all the documents, it was only an administrative matter,” he said.

A month after the earthquake, survivors seek to rebuild their lives