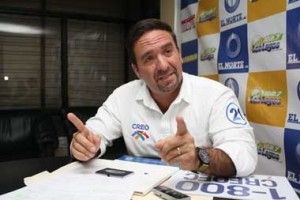 The CREO President, Cesar Monge, said he expects that the 16 lawsuits against him, which have not yet received a judgment of first instance, receive the same resolution issued last Friday.

Last week, the Judge of the Criminal Court, Djalma Blum, declared Monge innocent of the crime of libel, in one of the 17 complaints the prefect of Guayas, Jimmy Jairala, follows against Monge.

“With this decision, the logical thing would be if all cases are exactly alike, it shouldn’t be a difference among the resolution of each other, if the law is the same,” he said.

According to Monge, the sentence was a “triumph of truth” because, according to him, if he had said “something false,” he would not have been acquitted.