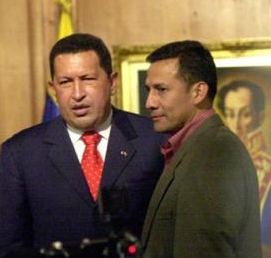 Daniel Cordova, a candidate for the Peruvian Congress, invited two leaders of the Venezuelan opposition to expose what they know regarding Chavez influence in the Humala’s campaign. Cordova made this as a way to support the presidential candidate, Pedro Pablo Kuczynski, a former ministry of Economy.

The leaders of the Venezuelan opposition warned today in Lima about the influence of Hugo Chavez political project with in the Peruvian presidential candidate, Ollanta Humala. So far Humala leads the polls for the elections to be held on next Sunday. This warning was stated during a press conference with Ricardo Sanchez, the Venezuelan National Assembly deputy and president of the Federation of College Institutions in Venezuela, along with the director of Leadership and Vision NGO, Alonso Dominguez. Sanchez assured his concern about the influence Chavez could have during the electoral process in Peru.

Last week Chavez declared that Humala was “a good soldier”, and that some parties are trying to link them to debilitate his candidature. The Venezuelan leader added that he expects to have a good relation with the future ruler of Peru.

Meanwhile Sanchez is warning about the political expansion project that Chavez has been developing for the past 12 years. A project that seeks that the revolution to happen not just in Venezuela, but also in the rest of the Latin American countries.

Correa Acknowledge His Signature In Sue against El Universo