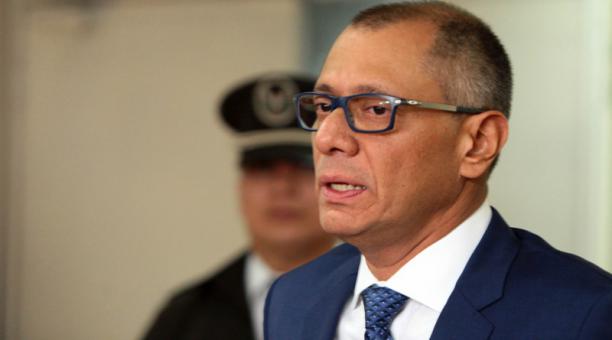 The Comptroller’s Office denied on Tuesday, December 26, 2017, the appeal for review presented by the Vice President of the Republic, Jorge Glas, which confirms his request for dismissal that the Assembly must execute.

The sanction was imposed as part of the report that established a series of anomalies in the Singue Block concession in the Amazon. In this way, administrative responsibility was confirmed against the Vice President, who was sentenced to six years in prison for illicit association in the Odebrecht case.

Two weeks ago the Assembly asked that President Lenin Moreno consult the Constitutional Court who should apply the dismissal of Glas, which was initially resolved by the Comptroller’s Office last October. After the Office of the Comptroller predetermined the dismissal, Glas filed an appeal for review, but the control authorities dismissed it for lack of defense elements. At that time, Glas announced: that he will present the appeal for review which has just been denied before the Comptroller and another process before the Contentious-Administrative Tribunal.

“It should be noted that, in the case of non-consented, in which this sanction with dismissal had effect, it would operate on the position of member of the Committee, but not on that of Vice President, position that he held from 2013 to the present, since the sanction it would fall on my previous functions and not on the current ones”.

“It no longer seems to be a coincidence,” he said, “that this new attack on me comes at the precise moment when a group of fellow assembly members filed a protection action against Executive Decree 176, which ordered the vice president to María Alejandra Vicuña, despite the fact that, constitutionally and administratively, I am in legitimate use of my vacations “. Article 48 of the Organic Law of the Comptroller establishes that “the sanctions of dismissal will be carried out by the corresponding appointing authority of the State institution, on which the server depends, by a final decision of the Comptroller’s Office”. (I)