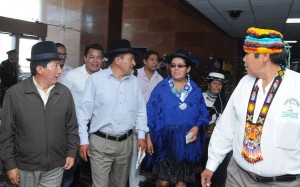 The Confederation of Indigenous Nationalities of Ecuador (CONAIE) again criticized the Law of Rural lands and ancestral territories, which is on second reading in the National Assembly.

Pepe Acacho, Assemblyman of Pachakutik (political arm of CONAIE) said they will recourse to the right to resistance; and the president of CONAIE, Jorge Herrera, indicated that this law violates the rights of small farmers and guarantees agribusiness, the agrarian revolution does not appear but monopoly is guaranteed.

“The law does not take into account the proposals of the farming sectors, of the peoples and nationalities, it does not guarantee the redistribution,” he added.

Meanwhile, in the plenary, eleven representatives of pro-government indigenous and peasant organizations were received at the General Commission to make their observations.
Source: http://www.eluniverso.com/noticias/2015/12/18/nota/5303889/conaie-se-declaro-resistencia-ley-tierras