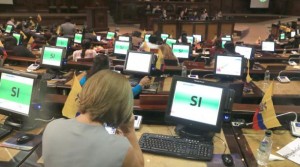 Alianza Pais (AP) aims to end this year with 17 approved laws. To reach this number, next week the Land Act will be voted, whose second debate began yesterday, December 17, 2015.

Although 2015 was a difficult year economically, the analysis of the nature of the bills approved by the ruling party reveals that there was a greater weight on social laws, which totaled seven bills; behind are those more technical laws, followed by those that pose the recovery of the State.

There are two standards of economic nature that were processed in an urgent way: Law of Interest and Penalties Remission, which enabled the Internal Revenue Service (SRI for its Spanish acronym) to raise USD 764 million. The other was the Law on Public-Private Partnerships and Foreign Investment to generate an investment of at least USD 3144 million in infrastructure and housing.

The adoption of the Law on Identity Management, which raises gender as an option in the ID card from 18 years old or the Law for the prevention of drugs, which increased penalties for micro-traffickers, stand out in laws of social approach.
Source: http://www.elcomercio.com/actualidad/asamblea-nacional-cerrara-2015-leyes.html