Construction companies talk of layoffs, while the government announces a plan 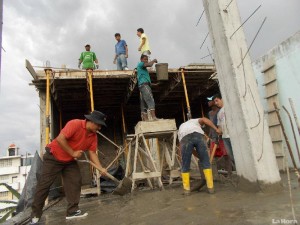 The construction guild unveiled its negative figures this year, the only one that has not shown growth in the last decade.

In a report by the Televistazo newscast, Henry Yandun, president of the Chamber of Construction Industries (CIC for its Spanish acronym), explained that the reduction in public investment for infrastructure this year has caused a drop in the sector.

Moreover, a survey conducted to 100 member companies of the CIC revealed that between January and October this year 1,948 layoffs were recorded.

Enrique Pita, head of the Chamber of Construction of Guayaquil, is pessimistic about the future: “We do not have expectations for next year,” he says, explaining that one of the main problems is the debt owed by the public sector to contractors.