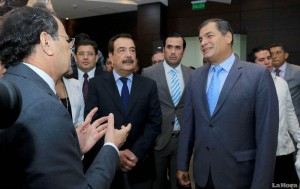 If the Guayaquil Mayor Jaime Nebot is runs for the presidential elections of 2017, he takes the risk of being defeated at the polls, said Tuesday president Rafael Correa during a discussion panel with reporters.

When asked about the interest of members of the Christian Social Party, like Assemblywoman Cynthia Viteri, so the Mayor of Guayaquil runs for the presidency, Correa said: “I hope Nebot runs for elections.”

At the discretion of the ruler, for Nebot “it would be a terrible mistake because of his age, after being repeatedly re-elected as mayor of Guayaquil, and considered successful by his electors, to take the risk of a third defeat at presidential level.”