Cordero is sworn as Minister of Security 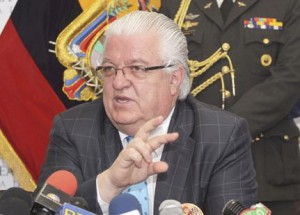 President Rafael Correa sworn the new Ministers of his Cabinet this Monday morning, among which is Fernando Cordero, who was designated as the head of the Ministry of Security.

With this new position, Cordero replaces Homero Arellano, who was in charge since December 2010.

Likewise, Correa officialized Victor Hugo Villacres as the new Chairman of the Board of IESS. On 18 March, Cordero announced his resignation as President of the Board of the Ecuadorian Institute of Social Security (IESS).

In his intervention, Correa highlighted the academic preparation of the new authorities and called them to “act with efficiency and intelligence.” He also thanked the relatives of the Ministers and secretaries for their support.

The jewel of the University ‘revolution’, Yachay,is inaugurated with 187 students