Correa granted Nebot with a deadline to assume traffic responsibility

During the discussion with media at Quito, President Rafael Correa gave a deadline of January 2015 for the mayor of Guayaquil, Jaime Nebot, to assume jurisdiction of transit, otherwise he will “probably” start charging the administration of 1,300 transit guards.

The president reiterated that 6 of the 7 municipalities in Group A already assumed the responsibility of transit and with the same resources. This was criticized when asked about the calling of a referendum by the Mayor Nebot, to ask if the Municipality should assume the responisibility or not.

In this city, the head of state announced that it will present on November 15, the reforms to the Labour Code, including among those there is unfair dismissal and higher compensation. For example, he said he would include greater allowances when the worker is dismissed because of their sexual orientation. 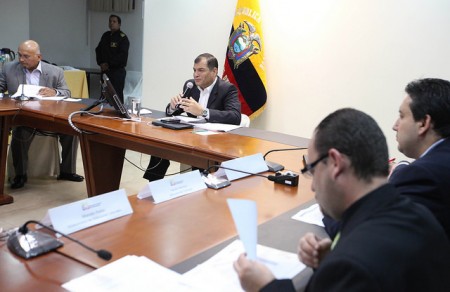 Risk of Ebola in Ecuador would be unlikely, officials

President urged Ecuadorians to retweet: Chevron, the world knows the damage you caused!