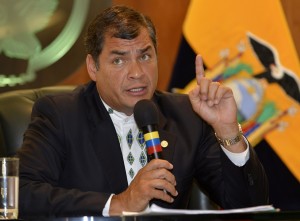 President Rafael Correa announced that limits will be established on profits of the workers of telecommunication companies and these will be probably done in the Labor Code.

He added that they are studying several measures based on a “fair and equitable” system to establish the reduction.

Correa said that the reform is proposed because the companies misrepresented the concept. According to the President, they pay less in an effort to balance out profits, which harms the state because the taxes are charged after the distribution of these, leaving the company with excessive profits.

Richard Calderon, President of the Autonomous Government Committee, said that there are different views on whether the Executive’s proposal must be analyzed in the Telecommunications Law.

President Correa qualifies report on bureaucracy in Ecuador as “a farce”

President urged Ecuadorians to retweet: Chevron, the world knows the damage you caused!