Risk of Ebola in Ecuador would be unlikely, officials 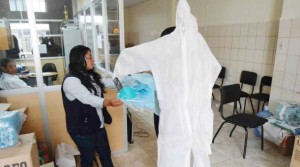 The Director of Epidemiological Surveillance in Ecuador, Pablo Acosta, reported on October 15 that the national airports are not ‘scenarios’ where control measures by Ebola should be applied. That’s because, according to the official, international air terminals are the placed where the suspected cases would be captured and measures are already been taken.

However, in Quito, the Quiport Corporation, which administers the Mariscal Súcre International Airport, said that two months ago their health monitoring plan is enabled to detect possible cases.

The intensity of people flow from West Africa would be the factor that defines the chance a nation has cases of this disease; “the more people come to these countries, there is more exposure,” said Acosta.

The representative of the Pan American Health Organization and the World Health Organization for Ecuador, Roberto Montoya, said that there is no hazard for people who come from the United States or Spain, countries with confirmed cases of Ebola, because “there is no a process of transmission” and the infected people are health staff that acquired the virus when attending who suffered from this evil.