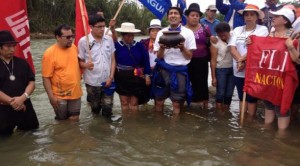 Dozens of indigenous met yesterday to thank the Pachamama for the crops and start a a march “in defense of water”, which will lead to Quito.

This conference aims to ask the Government to take into account their requests for the Water Law draft.

President Rafael Correa criticized and minimized the mobilization. He claimed it was pushed by a minority and behind it  were the “stone throwers of  MDP” and certain politicians of Pachakutik and Ecuarunari.

“Just let them march,  the next election they will continue marching”, said the President.

New amendments on communication and lands laws come into discussion