Correa to Armed Forces: “the ISSFA will not disappear!” 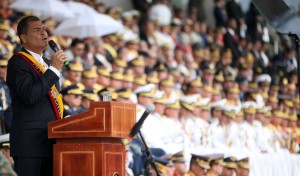 With an energetic speech of clarification President Rafael Correa made to the Armed Forces about the future of their social insurance and their restructuring, the heroic deeds of Cenepa war of 1995 were reminded. In the same way Correa expressed gratitude to commanders who were at war as well as the former presidents Jamil Mahuad and Alberto Fujimori, from Ecuador and Peru, for having achieved peace in 1998.

Correa remembered that his government has invested $ 1,718 million in modernizing the institution and offered to allocate this year another $ 109 million to build 1,712 homes.

He also admitted that the restructuring process of troops until 2025 is causing unease in the retired military personned for an alleged affectation in the Social Security Institute of the Armed Forces (ISSFA). Regarding this, he said: “I’m used that peoplebelieve me, I am tired of denying all the time false rumors. I’ll say it one last time, I’m not used that people do not believe me: the ISSFA will not disappear! You guys will choose who to believe, the deceitfuls of always or your commander in chief,” he said.

According to Correa, these rumors could create a situation similar to that of September 30, 2010, when a police riot occurred,so he insisted that investigations will be made.