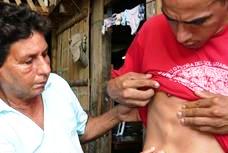 Rafael Correa, President of Ecuador, announced in a TV interview, that he will start a criminal trial against Luis Marcos Sovenis, who days ago attacked the president calling him “fascist.”

“(…) I assure you that there are people behind this because of the electoral campaigns. (…) He is going it have his own demand because of insulting the president, to call someone a fascist is a criminal offense, that is called “contempt”. If you like it or not, it is punishable under the Criminal Code and it is a moral damage; he affected my honor (…), “Correa said on Channel Telemar.

Depending on the version of the first mandatary, Sovenis rushed to the presidential motorcade without any reason. The president accused the citizen of being under the influence of drugs.

Shortly after yelling “fascist” to the president, Sovenis was surrounded by military guards who dragged him into a van and beat him blows to the head, back, abdomen and neck. Because of this aggression, Sovenis lost all his personal documents and the bike on which he was passing by.

Correa said that the guards who attacked the citizen belong to the Quevedo special forces of the country Brigade and they have nothing to do with the presidential security.

Navigation Chart of Ecuador will be sent to the UN