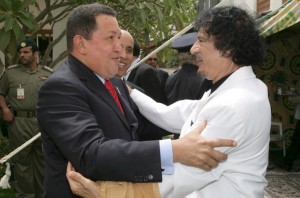 Yesterday the Pentagon admitted that Libya uses planes to bomb the demonstrators that oppose Gaddafi’s regime. The president of the United States, Barack Obama gave a press conference with his Mexican counterpart, Felipe Calderon. During the event Obama expressed the need to impose an air exclusion area in Libya, he also informed that his government has many options to do this.

France and the United Kingdom stated that in order to avoid attacks of Gaddafi force they would backup the air exclusion zone. However, the countries of the Middle East fear that such action could degenerate into a military intervention like in Iraq and Afghanistan.

Last Thursday, Obama authorized the use of military planes to repatriate the thousand of Egyptian exiles that escape their country in order to avoid the chaos. Over a hundred thousand civilians have left Libya since the beginning of the rebellion. According to a report of the United Nations, UN, the death toll of the suppression for the rebellion is of 1,000; however, an organization of human rights from Libya states that the number of casualties is 6,000. The International Penal Court (CPI) announced that the Libyan leader Muammar al Gaddafi, some of his sons and four high-ranking officials of their regime are charged with war crimes. Until yesterday the troops of Gaddafi continued to attack the cities of Brega and Ajdabiya.