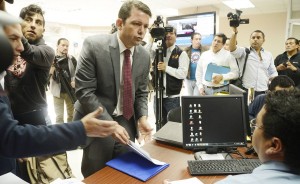 A demand that sought to make clear what is the procedure to promote a citizens’ initiative referendum was filed a month ago by the Constitution Court (CC), which took a resolution by a non-compliance action raised by the Compromiso Ecuador collective last April.

The front, that since 2014 brings together various organizations and citizens in favor of a referendum on indefinite reelection, submitted the action against the National Electoral Council (CNE) for failing to comply with “the jurisprudential rules established by the CC in its judgment No. DCP-CC-001-13.”

This is stated in the decision of the Court that “does not admit the resource for processing” and provides its ‘file,’ according to the report posted on the website of the Court.

The court, composed by Tatiana Ordenana, Manuel Viteri and Maria del Carmen Maldonado (she is no longer judge), considered that ordering the compliance with such rule “violates the purpose of the action by non-compliance, which is to ensure the application of the rules comprised in the legal system.”

The drop in mining production is offset by more exports