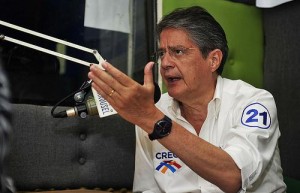 Guillermo Lasso, CREO movement leader, said that the process to initiate a referendum would begin when the Constitutional Court (CC) has ruled on the mechanisms for amendments to the Constitution.

Lasso said that if the Court finds that the Constitution should be amended via Assembly, citizens will be convened to gather enough signatures that allows the call to a query.

“This is a decision taken and we are analyzing the issues to be consulted, which will be known at the given time, but we seriously seek for this referendum not to simply be of political interest but serves to the interests of the public”, he added.

All the questions in the query have not yet been established, but the group added that there are two fundamental points: presidential term limits and dollarization.

The former President and leader of the Patriotic Society Party (SP) Lucio Gutierrez, added that the consultation should be led by the citizens. “A civic and patriotic board should be created, so this organizes, reaches a consensus on a list of questions and processes them in the CNE or CC, and then everyone who wants to support democracy, freedom and avoid indefinite reelection will join to the collection of signatures”, he said.