Crossfire between LigaPro and FEF 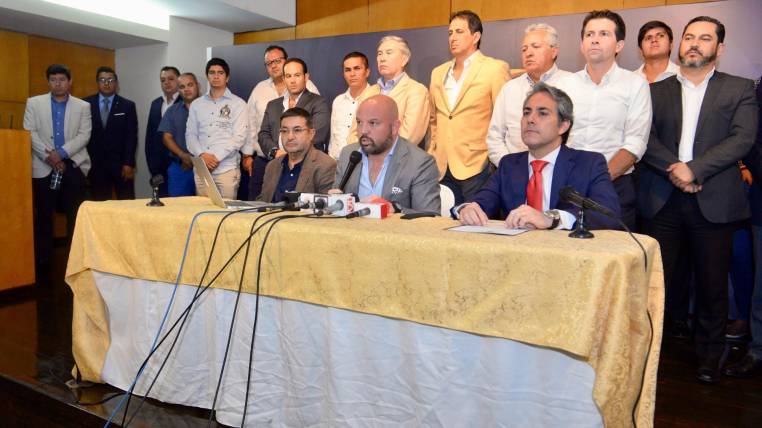 In January of this year, the Ecuadorian Football Federation (FEF acronym in spanish) and the clubs that make up the national football, defended in a single fist the contract for TV rights with GolTV LatinAmérica S.A. They handled a discourse of resistance against demands for the contest and how much this harmed them all; but that unit today was for history. The Professional Soccer League of Ecuador not only shook the FEF by turning its back on the Ecuador Cup, but also requires them to render an account of the contract with the company of Paco Casal.

The forms are elementary in a negotiation, and that is what the LigaPro demands from the FEF: “coherence” in the management of its decisions, which in the long run does have repercussions on the national football clubs.

Last May, the Ecuafútbol made official the creation of the Ecuador Cup, with calendar and start date. The idea was promoted and ratified by them, but not by the clubs of Series A and Series B. However, the discomfort is exaggerated when, on the part of third parties, the members of the LigaPro know that they negotiate the audiovisual rights of this contest.

The president of Barcelona Sporting Club, Jose Francisco Cevallos, explained yesterday that the position of not being part of this Ecuador Cup is given “because they have taken high resolutions” in the FEF, without considering them.

“We, like Barcelona, are very uncomfortable, to say the least, because they have allegedly been negotiated (the rights of transmission) with a company that made us a trial,” explained the head of the Canary Islands.

The only company that is involved in these negotiations is and sued Barcelona in 2017, it is Servisky S.A. (Canal del Fútbol). According to EXPRESO could know, the contract would oscillate the 4 million dollars.

The representative of Catholic University, Francisco Egas, also explained why this Ecuador Cup is “unfeasible” for clubs. “The calendar does not allow it. If you analyze that with the dates FIFA, Copa America, Copa Libertadores, Sudamericana and the 46 days of the local tournament, there is nowhere to stay. It is to put the shoe before the stocking. In addition, a contractual issue, with the provider of audiovisual services that the league has contracted, prevents us from participating in such a tournament, “said Egas.

In January 2019 elections are expected in the FEF. Carlos Villacís could finish his cycle and have hired a DT -independently the name- in the short time he has left as president, is not well seen by the members of the Professional League.

“I believe that it was not taken on time, beyond the chosen technician, it is why he is chosen now, when there are only a few months until his term ends. The opportune thing would have been for the new leadership to hire the strategist, “explained Diego Castro, representative of Liga de Quito.

And about that possible new king on the throne of the FEF, there are already some names that are studied in LigaPro. Although yesterday many refused to put face to the possible candidates, Francisco Egas and Santiago Morales are two options, in addition to neutral, that enjoy the acceptance of the majority of the clubs.

Finally, they demand the advance payments that GolTV made to the FEF, for the concept of the Ecuadorian championship, received prior to the transfer of power to the LigaPro. A novel that promises to have continuation.

1) The Ecuador Cup. LigaPro decided not to participate in the Ecuador Cup because they were not consulted by the FEF in its development, organization, calendar and negotiation of TV rights.

2) Demand figures. They request the delivery of “all the values that were delivered to him by concept of the then contract (…) with the FEF and GolTV”.

3) The decisions. They express their dissatisfaction with the last contracts signed, since they “commit” the incoming leadership. (I)