Cuban citizens in request an appointment with regime authorities 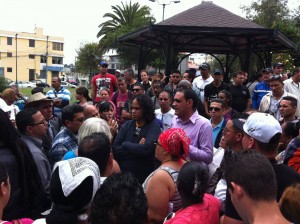 Dozens of Cubans gathered yesterday at La Concepcion park, in the north of Quito. Their aim is to consolidate the Cuban National Alliance Foundation, which has already started the paperwork to begin operations.

Its coordinator, Rolando Gallardo, said that although Ecuador received the Cubans in a good way, the conditions of many of his compatriots are critical. Therefore, the organization is requesting an audience with President Rafael Correa or any minister of state.

“We have three issues to present to the authorities: the regularization of Cubans in Ecuador, the recognition of our university degrees and help to travel to the United States.”

Most Cubans who are in the country seek to benefit from the Adjustment Act, which allows them to enter the US legally if they reach its borders. “The problem is the risk. Many women have been raped and many have died on that road,” he said.