Rafael Correa renounces to have hostessing 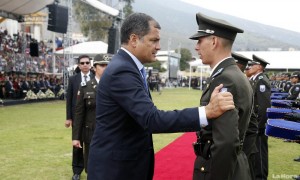 The president of Ecuador, Rafael Correa, withdrew his military aides according to a military reform that allows him to give up on those services, said Monday the official website El Ciudadano.

“As explained by the president, he will not have more aides,” said the ruling media.

A recent amendment to the Law of Staff of the Armed Forces terminates the aides service for the civil authorities of the State, excepting the President, who may decide if he wants to maintain it, reported The Citizen.

On Monday, Correa, in power since 2007, paid homage to his last aides (one for each branch of the Armed Forces: Army, Air Force and Navy), who met two years in those roles.

“Their names will be recorded in the history, dear friends, outgoing aides, because you will be the last aides I have, as I´m welcoming this reform,” said the ruler during the ceremony held at the presidential palace.