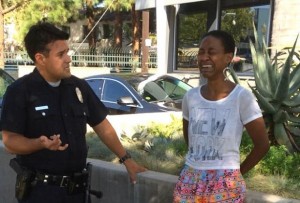 Daniele Watts, American actress, known for her role in the film “Django Unchained,” was detained last week by police officers in Los Angeles, by alleged indecent behavior with her partner in a parked car.

The actress complained against the police for mistaking her with a prostitute for “being black,”so she posted a picture of her crying in her Facebook account. “I was handcuffed and I was stopped by two police officers of the Department of Studio City after refusing to say that I had done something wrong by showing my affection,” Watts wrote in her account of the social network. Meanwhile, the police said through a statement that it is investigating the case.

Amy Winehouse is paid tribute with a statue