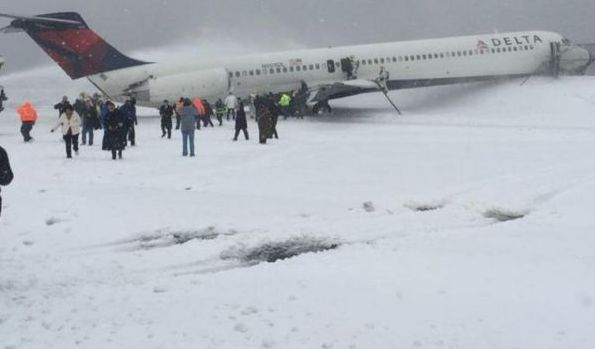 A Delta Airlines plane with 125 passengers and 5 crew, suffered an accident this Thursday when he went off the runway during landing at LaGuardia Airport in New York amid heavy storm of snow that affects the city.

The crash of Delta Airlines coming from Atlanta skidded off runway on landing at LaGuardia at 11:05 local time.

“Apparently there are no wounded and rescue and emergency services are already in the area,” authorities said and the 125 passengers and five crew members were evacuated from the plane safely.

The Port Authority of New York and New Jersey said in a statement that “the tracks remain closed as part of the standard procedures in such incidents and the Agency for Transport Safety is already on its way to investigate.”

The east coast of the United States is currently suffering the effects of new snowstorm that in the case of New York, is leaving problems when traveling by road and air transport.